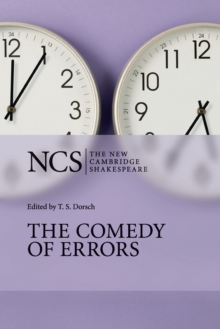 The Comedy of Errors Paperback / softback

For this second edition of The Comedy of Errors, Ros King has revised T.

S. Dorsch's renowned text and commentary and written a completely new introduction to the work.

She argues that the play cannot be regarded merely as a farcical romp based on a classical model but that it belongs to the critically misunderstood genre of tragi-comedy.

Emphasising the seriousness that underlies the text, she pays special attention to the play's religious imagery and at the same time engages fully with its lightness of touch and its continuing popularity in the theatre.

The volume also features accounts of recent and historical performances, and an updated reading list.