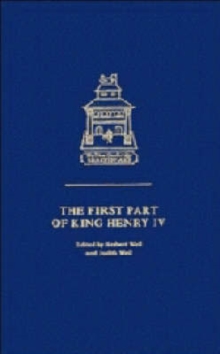 This edition offers a strongly theatrical perspective on the origins of Shakespeare's First Part of King Henry IV and the history of its interpretation.

In their introduction the editors clarify the play's surprising, de-centred dramatic structure, questioning the dominant assumption that the drama focuses on the education of Prince Hal.

They call attention to the effects of civil war upon a broad range of relationships.

Falstaff's unpredictable vitality is explored, together with important contemporary values of honour, friendship, festivity and reformation.

The notes also provide a thorough commentary on Shakespeare's transformation of his sources (particularly Holinshed's Chronicles) and suggest alternative stagings.

The stage history features detailed accounts of major productions since 1945.