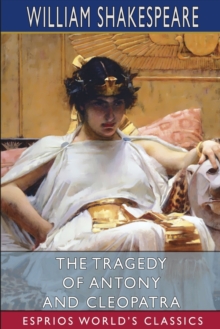 The Tragedy of Antony and Cleopatra (Esprios Classics) Paperback / softback

Antony and Cleopatra (First Folio title: The Tragedie of Anthonie, and Cleopatra) is a tragedy by William Shakespeare.

The play was first performed, by the King's Men, at either the Blackfriars Theatre or the Globe Theatre in around 1607; its first appearance in print was in the Folio of 1623.

The plot is based on Thomas North's 1579 English translation of Plutarch's Lives (in Ancient Greek) and follows the relationship between Cleopatra and Mark Antony from the time of the Sicilian revolt to Cleopatra's suicide during the Final War of the Roman Republic.

The major antagonist is Octavius Caesar, one of Antony's fellow triumvirs of the Second Triumvirate and the first emperor of the Roman Empire.