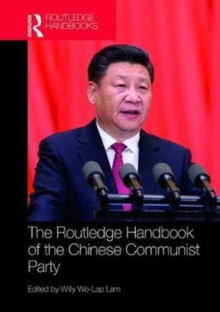 Whilst the Chinese Communist Party is one of the most powerful political institutions in the world, it is also one of the least understood, due to the party's secrecy and tight control over the archives, the press and the Internet.

Having governed the People's Republic of China for nearly 70 years though, much interest remains into how this quintessentially Leninist party governs one-fifth of the world and runs the world's second-largest economy.

The Routledge Handbook of the Chinese Communist Party gives a comprehensive and multi-faceted picture of the party's traditions and values - as well as its efforts to stay relevant in the twenty-first century.

It uses a wealth of contemporary data and qualitative analysis to explore the intriguing relationship between the party on the one hand, and the government, the legal and judicial establishment and the armed forces, on the other.

Tracing the influence of Marx, Engels, Lenin and Stalin, as well as Mao Zedong, on contemporary leaders ranging from Deng Xiaoping and Jiang Zemin to Hu Jintao and Xi Jinping, the sections cover:the party's history and traditions;how the party works and seeks to remain relevant;major policy arenas;the CCP in the twenty-first century. The Routledge Handbook of the Chinese Communist Party will be of interest to students and scholars of Chinese Politics, Asian Politics, Political Parties and International Relations. Go to https://www.bookshop4u.com/lw1 to see Willy Lam introduce the book.