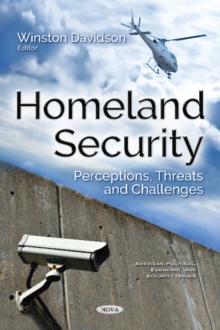 In this book, Chapter One explains how President Trump has organised his security apparatus, offers observations on his NSA and HSA, notes the way Trump has fused the NSC and HSC support staffs, assesses how the new commander-in-chief might employ his decision making system in the event certain national security scenarios arise, and concludes with comments on the Presidents unique approach to national security decision making.

Chapter Two aims to make sense of the last three and a half decades of border enforcement strategy as a prologue for future efforts.

Chapter Three defines crisis communication, highlights its connection to homeland security via the co-production of public safety and public order, and discusses its practical implications for social media.

Chapter Four investigates case studies of people who have fallen the wrong side of the security services, both private and public.

It discusses current approaches to identity cards and mass surveillance and how these can be more effectively implemented.