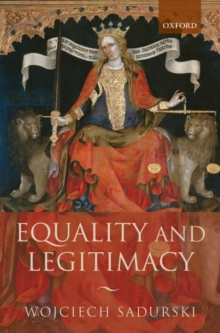 This book examines the relationship between the idea of legitimacy of law in a democratic system and equality, conceived in a tripartite sense: political, legal, and social.

Exploring the constituent elements of the legal philosophy underlying concepts of legitimacy, this book seeks to demonstrate how a conception of democratic legitimacy is necessary for understanding and reconciling equality and political legitimacy by tracing and examining the conceptions ofequality in political, legal, and social dimensions.

In the sphere of political equality this book argues that the best construction of equality in a democratic system - which resonates with the legitimizing function of majority rule - is that of equality of political opportunity.

It is largely procedural, but those procedures represent important substantive values built into a majoritarian system.

In the sphere of legal equality it argues that a plausible conception of non-discrimination can be constructed through a "reflective equilibrium"process, and should reject a thoughtless assumption that the presence of some particular criteria of differentiations necessarily taints a legal classification as discriminatory.

Finally, the chapters on social equality explore, in some detail, the currently influential, and presumptively attractive,"luck egalitarianism": the idea that social equality calls for neutralizing the disparate effects of bad brute luck upon a person's position in society.