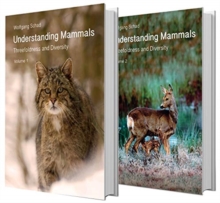 This monumental, groundbreaking work is the fruit of a lifetime of observation, research and meditation on humans and our closest animal relatives: mammals. The two volumes set out to answer questions such as:-- Are mammals solely the result of random mutation and natural selection essentially external factors or do the internal dynamics of the organism itself play a role in determining their astonishing diversity? -- Why do cattle have horns and deer have antlers?-- Why do small chipmunks have dorsal stripes that run parallel to their spine, and tigers have stripes on their flanks that run parallel to their ribs?

Wolfgang Schad demonstrates how such fascinating phenomena can be traced to which organ systems -- nerve-sense, centred in the head; metabolic-limb, centred in the digestive organs and limbs; and circulatory-respiratory, centred in the chest -- are emphasised in a particular species.

In this way he establishes the basis for a systematic understanding of mammalian morphology. Schad shows how the different emphases come to expression through a mammal's size, morphology, dentition and coloration, and also in its preferred habit and embryonic development. In almost five decades since its first edition, Wolfgang Schad has continued to add to what has become his life's major work.

This expanded second edition includes many new insights and additional chapters on antelopes, marsupials, bats, xenarthrans (armadillos, anteaters, and sloths), and pangolins, as well as on milk and mammalian embryology, mammalian embryology and much more.