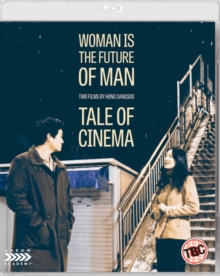 Woman Is the Future of Man/Tale of Cinema: Two Films By Hong... Blu-ray

In 'Woman Is the Future of Man' (2004) film school graduate Kim Hyeon-gon (Kim Tae-woo) reunites with his old friend Lee Mun-ho (Yu Ji-tae) after returning home to Korea from America.

However, tensions begin to rise when the pair meet up with Kim's old girlfriend Park Seon-hwa (Sung Hyun-ah).

In 'Tale of Cinema' (2005) Jeon Sang-won (Lee Ki-woo) bumps into his old girlfriend Choi Young-shil (Uhm Ji-won) after completing his final college exams but is unsure of how he feels when the pair agree to spend some time together once again.