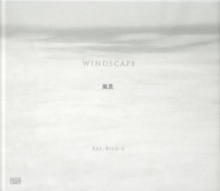 His new series, created over the course of the past twenty years, features landscapes in motion.

Trees and grass lean in the wind; steep crags, cliffs, and rocks and stones shaped by water lie enveloped in sea spray and fog in the surf; the lines of the horizon disappear in the white-gray of the sky.

As is also the case in Chinese and Japanese, the Korean word commonly used to denote landscape is a compound of the words "wind" and "scenery." It is closely bound to the traditional cosmological notion of a quintessence that permeates all living things: the ether.

The poetic neologism, "windscape," is a literal translation of this term, which is associated with the same levels of meaning throughout East Asia.