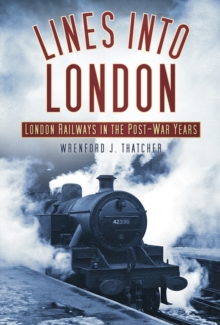 Lines into London : London Railways in the Post-War Years Hardback

A nostalgic journey through the last years of steam and the early diesels around London. In 1948 British Rail came into being and with it a new era in railway history.

The glory days of steam were numbered and when railway photographers like author Wrenford Thatcher were eagerly snapping their favourite locomotives in the 1950s and '60s, British Rail were busily introducing many diverse diesel locomotive designs as part of the programme to eliminate steam traction. Wrenford Thatcher's collection of evocative photographs is divided into eastern, southern, western and midland regions, revealing the changes occurring on the London railways in the post-war years.

From Euston and Paddington right out to the suburbs all around London and the wider UK, these stunning, previously unpublished images beautifully record the mood of the late '40s, '50s and '60s and the last great days of steam.