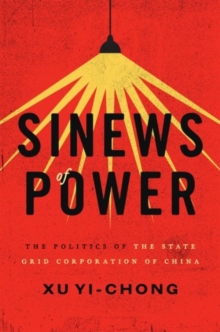 Sinews of Power : Politics of the State Grid Corporation of China Hardback

Electricity is a basic requirement for a modern economy, and transmission grids at the center of transition to a low-carbon power system.

They are the principal means to integrate large shares of wind and solar power and they are essential to ensuring a secure and reliable electricity supply.

Grid companies around the world are struggling to find their niche in this transition.

The State Grid Corporation of China (SGCC) is one of the principal players in this roundof global competition.

Central state-owned enterprise (SOEs), such as SGCC, continue to hold the 'commanding heights' of the Chinese economy.

Their relationship with the Party-state is crucial to understanding the questions of whether SOEs take orders from, and do the bidding of, the Chinese Communist Party, and how they operate under the state ownership and with a wide range of operational autonomy and expectation that they are profit-maximazing corporations. This book examines the origin, development and expansion of SGCC, the world's largest utility company and the 7th largest corporation.

By telling both the electricity story and the SOE story, it provides insights into the challenges facing the grids and their possible futures.

It challenges the orthodox account of Chinese politics that portrays SOEs as little more than puppets, jumping to every demand of the Party-state.

It shows that SGCC has been built into a modern corporation byentrepreneurial managers.

By extending its operation to four continents, SGCC is now a global player, competing with its peers and also having its input in the future low-carbon electricity system. This book challenges the popular interpretation of Chinese government.

Piling detail on detail, it provides a comprehensive picture of Chinese political economy that is both new and utterly convincing.