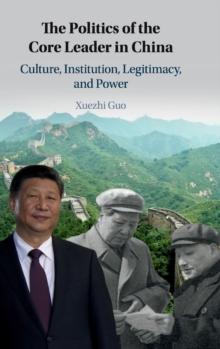 The Politics of the Core Leader in China : Culture, Institution, Legitimacy, and Power Hardback

The desire for the 'core' leader has been imbedded in the ruling philosophy of the Chinese Communist Party.

As the role of the 'core' leader and his interactions with other ruling elite are important in understanding Chinese politics, this book attempts to focus on the role of the party chief and how he could become the 'core' of the leadership.

Xuezhi Guo provides the most detailed and comprehensive scrutiny of the 'core' of the Chinese Communist Party leadership and meticulously analyses the cultural, philosophical, and ideological origins as well as its evolution throughout the party's history.

This study introduces an eclectic approach that integrates the most useful analytical perspectives and insights from Chinese political history, philosophy, and mainstream Western methodologies in order to explain the consistent patterns of elite politics and the behavior of the party's high-ranking leaders during times of cooperation and conflict from Mao Zedong to Xi Jinping.