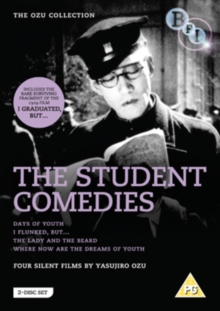 Collection of four silent comedies from Japanese director Yasujirô Ozu. 'Days of Youth' (1929), Ozu's earliest surviving feature, follows a love triangle between two college friends (Ichirô Yuki and Tatsuo Saitô) as they both try to win the affections of a girl (Junko Matsui) they meet on a skiing holiday.

In 'The Lady and the Beard' (1931) recently graduated traditionalist Kiichi Okajima (Tokihiko Okada) shaves his old-fashioned beard when he falls for a modern woman and, as he pursues her, attracts the attentions of two other women.

In 'Where Now Are the Dreams of Youth?' (1932) Taichiro Saiki (Saitô)'s friendships are threatened when he takes over his father's company and employs three of his former university buddies.

As a new dynamic is added to Taichiro's relationship with the others, their friendships come under strain, eventually leading to a disturbing climax.