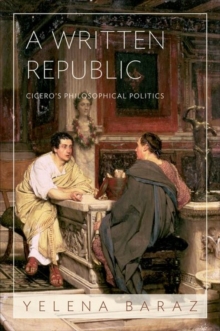 In the 40s BCE, during his forced retirement from politics under Caesar's dictatorship, Cicero turned to philosophy, producing a massive and important body of work.

As he was acutely aware, this was an unusual undertaking for a Roman statesman because Romans were often hostile to philosophy, perceiving it as foreign and incompatible with fulfilling one's duty as a citizen.

How, then, are we to understand Cicero's decision to pursue philosophy in the context of the political, intellectual, and cultural life of the late Roman republic?

In A Written Republic, Yelena Baraz takes up this question and makes the case that philosophy for Cicero was not a retreat from politics but a continuation of politics by other means, an alternative way of living a political life and serving the state under newly restricted conditions.

Baraz examines the rhetorical battle that Cicero stages in his philosophical prefaces--a battle between the forces that would oppose or support his project.

He presents his philosophy as intimately connected to the new political circumstances and his exclusion from politics. His goal--to benefit the state by providing new moral resources for the Roman elite--was traditional, even if his method of translating Greek philosophical knowledge into Latin and combining Greek sources with Roman heritage was unorthodox.

A Written Republic provides a new perspective on Cicero's conception of his philosophical project while also adding to the broader picture of late-Roman political, intellectual, and cultural life. 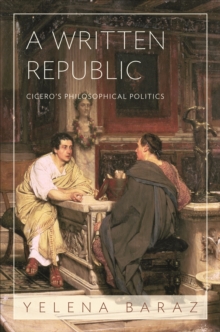