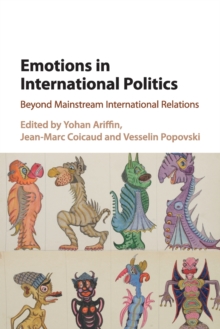 In recent years, social scientists have increasingly recognized the interconnectedness of thought on emotions.

Nowhere is the role of passions more evident than international politics, where pride, anger, guilt, fear, empathy, and other feelings are routinely on display.

But in the absence of an overarching theory of emotions, how can we understand their role at the international level?

Emotions in International Politics fills the need for theoretical tools in the new and rapidly growing subfield of international relations.

Eminent scholars from a range of disciplines consider how emotions can be investigated from an international perspective involving collective players, drawing evidence from such emotionally fraught events as the Rwandan genocide, World War II, the 9/11 attacks, and the Iranian nuclear standoff.

The path-breaking research collected in Emotions in International Politics will be a valuable theoretical guide to understanding conflict and cooperation in international relations.