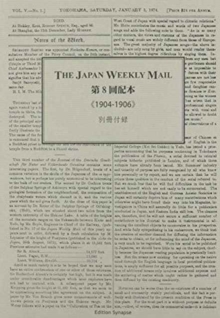 Published by Edition Synapse and distributed outside Japan by Routledge. This is the eighth part of the facsimile reprint series of the leading English newspaper published in Yokohama throughout the Meiji era.

It represents a complete collection, provided by the Yokohama Archives of History and other institutions.

Playing an important role for Meiji Japan's exchange with western society, the journal contains articles on politics, commerce, and economics, and also on the cultural activities of early Japanologists and the Asiatic Society of Japan.

It is an indispensable primary source for any scholar of Modern Japan. The Japan Weekly Mail published during this period is in particular important for their coverage on the Russo-Japan War and is regarded as the vital primary source for any scholars and students to research the subject and the Japan's military movement in the early twentieth century.