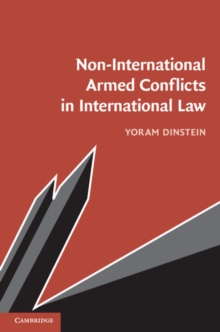 This dispassionate analysis of the legal implications of non-international armed conflicts explores the rules regulating the conduct of internal hostilities, as well as the consequences of intervention by foreign States, the role of the Security Council, the effects of recognition, State responsibility for wrongdoing by both Governments and insurgents, the interface with the law of human rights and the notion of war crimes.

The author addresses both conceptual and specific issues, such as the complexities of 'failing' States or the recruitment and use of child soldiers.

He makes use of the extensive case law of international courts and tribunals, in order to identify and set out customary international law.

Much attention is also given to the contents of available treaty texts (primarily, the Geneva Conventions, Additional Protocol II and the Rome Statute of the International Criminal Court): what they contain and what they omit.