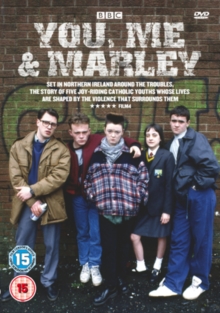 You, Me and Marley DVD

Made-for-TV drama following a group of Northern Ireland youths caught up in the Catholic-Protestant conflict of the late twentieth century.

Sean (Marc O'Shea) is the leader of a gang of five Catholic youths who, disaffected by the violence that has surrounded them for most of their lives, take to joyriding and petty crime as an escape.

Rather than leading them into trouble with the Protestant population, their joyriding raises the ire of the IRA.

A member of the gang, Marley (Michael Liebmann), is violently beaten by the IRA to give warning to the others about their behaviour.

How will the other members of the group respond now they are confronted personally with the violence of their city?