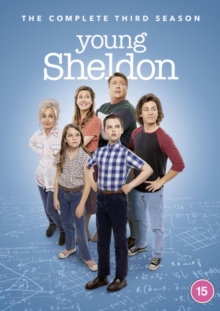 All 21 episodes from the third season of the comedy spin-off of 'The Big Bang Theory' starring Iain Armitage as a young Sheldon Cooper.

The episodes are: 'Quirky Eggheads and Texas Snow Globes', 'A Broom Closet and Satan's Monopoly Board', 'An Entrepreneurialist and a Swat On the Bottom', 'Hobbitses, Physicses and a Ball With Zip', 'A Pineapple and the Bosom of Male Friendship', 'A Parasol and a Hell of an Arm', 'Pongo Pygmaeus and a Culture That Encourages Spitting', 'The Sin of Greed and a Chimichanga from Chi-Chi's', 'A Party Invitation, Football Grapes and an Earth Chicken', 'Teenager Soup and a Little Ball of Fib', 'A Live Chicken, a Fried Chicken and Holy Matrimony', 'Body Glitter and a Mall Safety Kit', 'Contracts, Rules and a Little Bit of Pig Brains', 'A Slump, a Cross and Roadside Gravel', 'A Boyfriend's Ex-Wife and a Good Luck Head Rub', 'Pasadena', 'An Academic Crime and a More Romantic Taco Bell', 'A Couple Bruised Ribs and a Cereal Box Ghost Detector', 'A House for Sale and Serious Woman Stuff', 'A Baby Tooth and the Egyptian God of Knowledge' and 'A Secret Letter and a Lowly Disc of Processed Meat'.