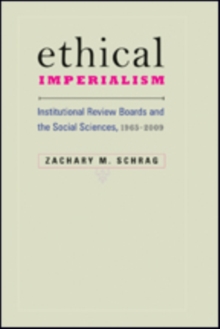 University researchers in the United States seeking to observe, survey, or interview people are required first to complete ethical training courses and to submit their proposals to an institutional review board (IRB).

Under current rules, IRBs have the power to deny funding, degrees, or promotion if their recommended modifications to scholars' proposals are not followed.

This volume explains how this system of regulation arose and discusses its chilling effects on research in the social sciences and humanities. Zachary M. Schrag draws on original research and interviews with the key shapers of the institutional review board regime to raise important points about the effect of the IRB process on scholarship.

He explores the origins and the application of these regulations and analyzes how the rules-initially crafted to protect the health and privacy of the human subjects of medical experiments-can limit even casual scholarly interactions such as a humanist interviewing a poet about his or her writing. In assessing the issue, Schrag argues that biomedical researchers and bioethicists repeatedly excluded social scientists from rule making and ignored the existing ethical traditions in nonmedical fields.

Ultimately, he contends, IRBs not only threaten to polarize medical and social scientists, they also create an atmosphere wherein certain types of academics can impede and even silence others.

This short, smart analysis will engage scholars across academia.