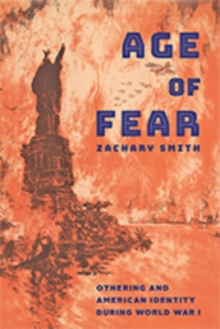 Age of Fear : Othering and American Identity during World War I Hardback

Although Americans have long celebrated their nation's diversity, they also have consistently harbored suspicions of foreign peoples both at home and abroad.

In Age of Fear, Zachary Smith argues that, as World War I grew more menacing and the presumed German threat loomed over the United States, many white "Anglo-Saxon" Americans grew increasingly concerned about the vulnerability of their race, culture, and authority.

Consequently, they directed their long-held apprehensions over ethnic and racial pluralism onto their German neighbors and overseas enemies whom they had once greatly admired. Smith examines the often racially tinged, apocalyptic arguments made during the war by politicians, propaganda agencies, the press, novelists, and artists.

He also assesses citizens' reactions to these messages and explains how the rise of nationalism in the United States and Europe acted as a catalyst to hierarchical racism.

Germans in both the United States and Europe eventually took the form of the proverbial "Other," a dangerous, volatile, and uncivilized people who posed an existential threat to the nation and all that Anglo-Saxon Americans believed themselves to be.

Exploring what the Great War meant to a large portion of the white American population while providing a historic precedent for modern-day conceptions of presumably dangerous foreign Others, Age of Fear is a compelling look at how the source of wartime paranoia can be found in deep-seated understandings of racial and millennial progress.