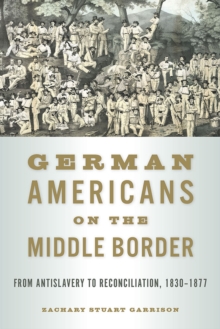 German Americans on the Middle Border : From Antislavery to Reconciliation, 1830-1877 Paperback / softback

Before the Civil War, Northern, Southern, and Western political cultures crashed together on the middle border, where the Ohio, Mississippi, and Missouri Rivers meet.

German Americans who settled in the region took an antislavery stance, asserting a liberal nationalist philosophy rooted in their revolutionary experience in Europe that emphasized individual rights and freedoms.

By contextualizing German Americans in their European past and exploring their ideological formation in failed nationalist revolutions, Zachary Stuart Garrison adds nuance and complexity to their story. Liberal German immigrants, having escaped the European aristocracy who undermined their revolution and the formation of a free nation, viewed slaveholders as a specter of European feudalism.

During the antebellum years, many liberal German Americans feared slavery would inhibit westward progress, and so they embraced the Free Soil and Free Labor movements and the new Republican Party.

Most joined the Union ranks during the Civil War. After the war, in a region largely opposed to black citizenship and Radical Republican rule, German Americans were seen as dangerous outsiders.

Facing a conservative resurgence, liberal German Republicans employed the same line of reasoning they had once used to justify emancipation: A united nation required the end of both federal occupation in the South and special protections for African Americans.

Having played a role in securing the Union, Germans largely abandoned the freedmen and freedwomen.

They adopted reconciliation in order to secure their place in the reunified nation.

Garrison's unique transnational perspective to the sectional crisis, the Civil War, and the postwar era complicates our understanding of German Americans on the middle border.