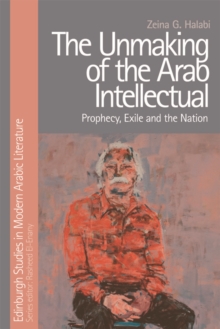 The Unmaking of the Arab Intellectual : Prophecy, Exile and the Nation Hardback

In this book Zeina G. Halabi examines the figure of the intellectual as profet national icon, and exile in contemporary Arabic literature and film.

She argues that the ambivalence and disillusionment with the role of the intellectual in contemporary representations operate as a productive reclaiming of the'political'in an allegedly apolitical context.

The Unmaking of the Arab Intellectual offers the critical tools to understand the evolving relations between the intellectual and power, and the author and the text in the hitherto uncharted contemporary era.