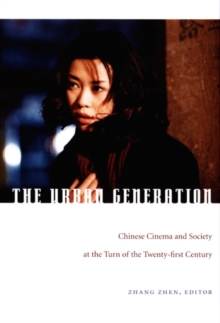 The Urban Generation : Chinese Cinema and Society at the Turn of the Twenty-First Century Hardback

Since the early 1990s, while mainland China's state-owned movie studios have struggled with financial and ideological constraints, an exciting alternative cinema has developed.

Dubbed the "Urban Generation," this new cinema is driven by young filmmakers who emerged in the shadow of the events at Tiananmen Square in 1989.

What unites diverse directors under the "Urban Generation" rubric is their creative engagement with the wrenching economic and social transformations underway in China.

Urban Generation filmmakers are vanguard interpreters of the confusion and anxiety triggered by the massive urbanization of contemporary China.

This collection brings together some of the most recent original research on this emerging cinema and its relationship to Chinese society.The contributors analyze the historical and social conditions that gave rise to the Urban Generation, its aesthetic innovation, and its ambivalent relationship to China's mainstream film industry and the international film market.

Focusing attention on the Urban Generation's sense of social urgency, its documentary impulses, and its representations of gender and sexuality, the contributors highlight the characters who populate this new urban cinema-ordinary and marginalized city dwellers including aimless bohemians, petty thieves, prostitutes, postal workers, taxi drivers, migrant workers-and the fact that these "floating urban subjects" are often portrayed by non-professional actors.

Some essays concentrate on specific films (such as Shower and Suzhou River) or filmmakers (including Jia Zhangke and Zhang Yuan), while others survey broader concerns.