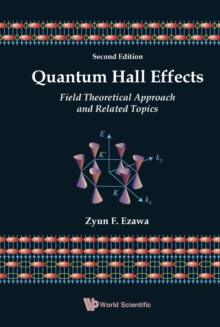 The quantum Hall effect (QHE) is one of the most fascinating and beautiful phenomena in all branches of physics.

Tremendous theoretical and experimental developments are still being made in this sphere.

In the original edition of this book, composite bosons, composite fermions and fractional charged excitations (anyons) were among the distinguished ideas presented.

This new edition includes many novel ideas according to recent progress.

Fantastic phenomena associated with the interlayer phase coherence and SU(4) quantum Hall ferromagnets in the bilayer system are extensively reviewed.

The microscopic theory of the QHE is formulated based on noncommutative geometry, the underlying mathematical structure.

Quasiparticles are described as noncommutative solitons.

The coverage also includes the recent development of the unconventional QHE in graphene (a single atomic layer graphite), where the electron dynamics can be treated as relativistic Dirac fermions and even the supersymmetric quantum mechanics plays a key role.

An instructive and comprehensive overview of the QHE, this book is also suitable as an introduction to quantum field theory with vivid applications.

Only a knowledge of quantum mechanics is assumed.