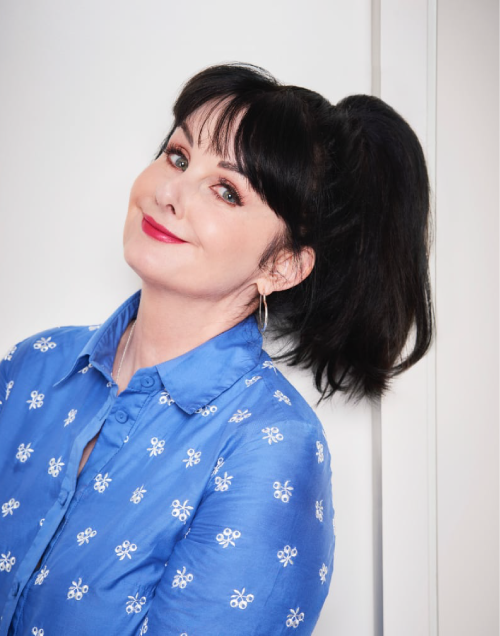 Marian Keyes is one of the most successful Irish novelists of all time. Though she was brought up in a home where a lot of oral story telling went on, it never occurred to her that she could write. Instead she studied law and accountancy and finally started writing short stories in 1993 “out of the blue.” Though she had no intention of ever writing a novel (“It would take too long”) she sent her short stories to a publisher, with a letter saying she’d started work on a novel. The publishers replied, asking to see the novel, and once her panic had subsided, she began to write what subsequently became her first book Watermelon, published in 1995.

To date, the woman who said she’d never write a novel has published 14 of them: Watermelon, Lucy Sullivan is Getting Married, Rachel’s Holiday, Last Chance Saloon, Sushi for Beginners, Angels, The Other Side of the Story, Anybody Out There, This Charming Man, The Brightest Star in the Sky , The Mystery of Mercy Close, The Woman Who Stole My Life and The Break. Her books have all been bestsellers around the world, with a total of over 30 million of her books sold to date in 33 languages. Anybody Out There won the British Book Awards award for popular fiction and the inaugural Melissa Nathan Prize for Comedy Romance. This Charming Man won the Irish Book Award for popular fiction. Marian’s latest book Grown Ups is publishing in hardback and eBook in February 2020.

The books deal variously with modern ailments, including addiction, depression, domestic violence, the glass ceiling and serious illness, but always written with compassion, humour and hope.

As well as novels she has written short stories, and articles for various magazines and other publications. She has published three collections of her journalism, titled Under the Duvet  and Further Under the Duvet, now collected in one volume under the title Under the Duvet: Deluxe Edition, and donated all royalties from Irish sales to the Simon Community, a charity which works with the homeless. In 2016 Marian published a new collection of essays, Making It Up As I Go Along.

She was born in Limerick in 1963, and brought up in Cavan, Cork, Galway and Dublin; she spent her twenties in London, but is now living in Dún Laoghaire with her husband Tony. She includes among her hobbies reading, movies, shoes, handbags, painting and feminism.

They're a glamorous family, the Caseys. Johnny Casey, his two brothers Ed and Liam, their beautiful, talented wives and all their kids spend a lot of time together - birthday parties, anniversary celebrations, weekends away. Everything stays under control until Ed's wife Cara, gets concussion and can't keep her thoughts to herself. One careless remark at Johnny's birthday party, with the entire family present, starts Cara spilling out all their secrets. In the subsequent unravelling, every one of the adults finds themselves wondering if it's time - finally - to grow up?

The Woman Who Stole My Life