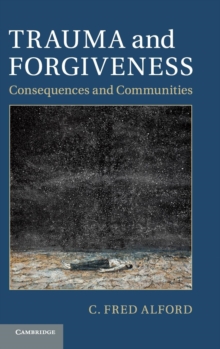 Contrary to the view of trauma popularized by literary theorists, Trauma and Forgiveness argues that the traumatized are capable of representing their experience and that we should therefore listen more and theorize less.

Using stories and case studies, including testimonies from Holocaust survivors, as well as the victims of 'ordinary' trauma, C.

Fred Alford shows that, while the traumatized are generally capable of representing their experience, this does little to heal them.

He draws on the British Object Relations tradition in psychoanalysis to argue that forgiveness, which might be expected to help heal the traumatized, is generally an attempt to avoid the hard work of mourning losses that can never be made whole.

Forgiveness is better seen as a virtue in the classical sense, a recognition of human vulnerability.

The book concludes with an extended case study of the essayist Jean Amery and his refusal to forgive.