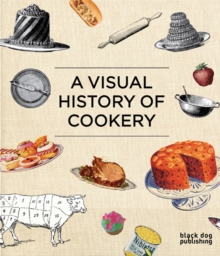 Looking back to the Roman Empire and tracing cookery's progression right through to the present day, A Visual History of Cookery depicts the abundant feasts, intricate tableware and decadent menus of the countries featured and considers their impact on contemporary food customs.

Fascinating and influential culinary traditions from France, England, Italy, Spain and America are explored, with vivid food photography and illustrations depicting cooking methods, celebrated dishes, eating habits and food festivals. A Visual History of Cookery also takes a look at the iconic branding behind the food we buy and the restaurants we eat in - from fast food giant McDonald's to the critically acclaimed El Bulli restaurant in rural Spain.

Also featured are celebrity chefs, including Jamie Oliver, Gordon Ramsay, Delia Smith, James Beard, Julia Child, Martha Stewart, Thomas Keller, and the fictional Betty Crocker. A Visual History of Cookery is beautifully illustrated throughout, with paintings, photographs, illustrations and advertisements that not only explore the culinary history of each cuisine featured but also an introduction to the country's national dishes - from England's Bubble and Squeak to Italy's Risotto alla Milanese.

Complete with a selection of original recipes and contributions from esteemed food writers, chefs and restaurateurs including AA Gill, Ferran Adria, Anthony Bourdain, Elizabeth David and Alice Waters, A Visual History of Cookery is a book that all foodies, cooks and homemakers should have on their bookshelves.