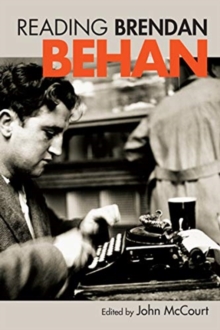 Samuel Beckett referred to Brendan Behan as "the new O'Casey" and yet, despite all his international success, despite his enduring popularity, and perhaps because of his fame (and indeed, notoriety), Behan remains a neglected figure in literary criticism today.

This is why this new volume edited by leading Irish Studies expert, John McCourt, is so timely.

Penned by an impressive group of international scholars, Reading Brendan Behan looks beyond the author's all-too-well-known personality and focuses on what ultimately matters - the writing.

Reading Brendan Behan is the first volume in 20 years to focus on Behan's rich and eclectic body of creative works - his poetry and plays in Irish and English, his short stories and his extraordinary autobiographical novel, Borstal Boy.

It explores how Behan sought to identify the proper role for the post-independence Irish writer in a country where clerical and political policing and rigid censorship laws allowed little room for artistic manoeuvre.

These essays position Behan between the founding father of Irish modernism, James Joyce, and Behan's own generation, bringing him into dialogue with figures such as Flann O'Brien and Martin O'Cadhain.

It pays prominent attention to his connections with Irish Republicanism, his formative time in England, his links with theatre directors, such as Joan Littlewood, as well as his engagement with politics and popular culture on both sides of the Irish Sea.

These variegated connections make Behan a unique, if initially unlikely, bridge between Britain and Ireland.

This volume will set the context in which Behan's works will be read into the future and firmly locate him as a major player in late modernism.

While engaging in much close reading, the essays employ a variety of recent critical approaches, among them cultural studies, theatre studies, translation and comparative studies, Post-Colonial theory, Queer theory, and reception studies.

Reading Brendan Behan will reinvigorate scholarly interest and renew critical appraisal of one of Ireland's funniest, trickiest, and, at the same time, most serious experimental writers. John McCourt is at the Dipartimento di Studi Umanistici, Universita di Macerata