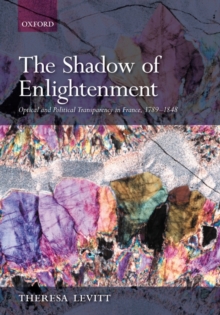 The Shadow of Enlightenment : Optical and Political Transparency in France 1789-1848 Hardback

by Theresa (Department of the History, University of Mississippi) Levitt

This book is the first to place revolutionary advances in light and optics in the cultural context of France in the first half of the nineteenth century.

The narrative follows the work and careers of France's two chief rivals on the subject of light: Arago and Biot.

Their disagreement began on the subject of technical optics, but expanded to include politics, religion, agricultural policy, education, dinner companions, housing arrangements, photography, railroads,vital forces, astrology, the Egyptian calendar, and colonial slavery. At the heart of their disagreement was always a question of visibility, and the extent of transparency or obscurity they assigned to the world. Optical transparency formed a crucial condition for Arago's vision of a liberalrepublic governed by reason.

Biot's call for strong forms of authority rested on his claims that the world did not offer itself up for universal agreement so easily.