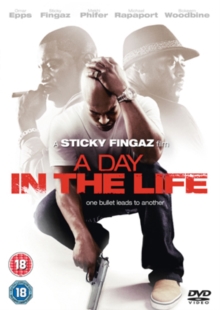 A Day in the Life DVD

Thriller starring rapper Sticky Fingaz as a New York gang member who finds himself in the middle of a crime war.

The film spans one day in the life of the characters, but it's one very important day - the gang faces a rival group in a gritty street showdown.

Director and actor Sticky Fingaz has tried to take the genre in a new direction and plays to the cast's hip hop roots by having the dialogue spoken in rap.