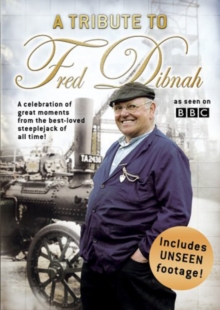 A Tribute to Fred Dibnah DVD

Four programmes paying tribute to the steeplejack and television presenter Fred Dibnah, whose BBC programmes introduced a generation of viewers to Britain's industrial heritage. 'The BBC Tribute' is produced by David Hall, and looks at Fred's long and varied career. 'Fred Dibnah's Last Chimney' is a previous unbroadcast documentary looking at the felling of Fred's last chimney at Park Mill in Royton. 'Memories of Fred' includes interviews with some of Fred's old friends and colleagues, while 'Fred at the Palace' covers Fred receiving his MBE from the Queen.