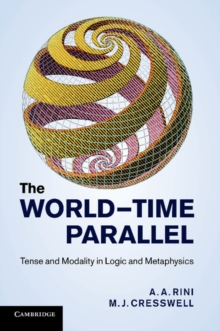 The World-Time Parallel : Tense and Modality in Logic and Metaphysics Paperback / softback

Is what could have happened but never did as real as what did happen?

What did happen, but isn't happening now, happened at another time.

Analogously, one can say that what could have happened happens in another possible world.

Whatever their views about the reality of such things as possible worlds, philosophers need to take this analogy seriously.

Adriane Rini and Max Cresswell exhibit, in an easy step-by-step manner, the logical structure of temporal and modal discourse, and show that every temporal construction has an exact parallel that requires a language that can refer to worlds, and vice versa.

They make precise, in a way which can be articulated and tested, the claim that the parallel is at work behind even ordinary talk about time and modality.

The book gives metaphysicians a sturdy framework for the investigation of time and modality - one that does not presuppose any particular metaphysical view.