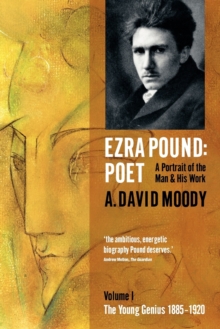 by A. David (Professor Emeritus, University of York) Moody

This first volume of what will be a full-scale portrait presents Ezra Pound as a very determined and energetic young genius setting out to make his way both as a poet and as a force for civilization in England and America in the years before, during and just after the 1914-18 war. In a clear and lively narrative A. David Moody weaves a story of Pound's early life and loves; of his education in America; of his apprentice years in London, devoted to training himself to be as a good and powerful a poet as he had it in him to become; of his learning there from W.

B.Yeats and Ford Madox Hueffer, then forming his own Imagiste group, and going on from that to join with Wyndham Lewis in his Vorticism, and to link up also with James Joyce and T.

S. Eliot to create the modernistvortex in the midst of the 1914-18 war.

We see Pound scraping a living by writing prose for individualist and socialist periodicals, and emerging as not only an inspired literary critic, but as a critic of music and society as well.

Above all, Moody shows Pound's evolution as a poet from thederivative idealism and aestheticism of his precocious youth into the truly original author of Homage to Sextus Propertius and Hugh Selwyn Mauberley.

We find him becoming committed, moreover, to the reform of the capitalist system in the name of economic justice for all. This is the first biography to put Pound's poetry at the heart of his existence, where he himself placed it, and to view his extraordinarily active life, his loves, and his creative effort, as a single complex drama.

The altogether new and comprehensive account of all of his poems, from the earliest through Cathay and up to Hugh Selwyn Mauberley and the first Cantos , will illuminate his poetry and make it more accessible.

The poetry, the prose writings, and the personal life are all woven together into a brilliantnarrative portrait of the poet as a young man.

The second volume, The Epic Years, carries on the narrative of his life and works from 1921, the year in which he took up residence in Paris.