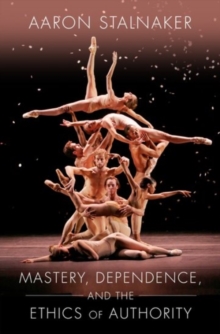 Mastery, Dependence, and the Ethics of Authority Hardback

Over the last few decades, skepticism about political and moral experts has grown into a serious social problem, undermining the functioning of liberal democratic regimes. Indeed, meritocracy-that is, government by hard working, public-spirited people with high levels of relevant expertise-has never looked so promising as an alternative to the dangers of know-nothing populism. One cultural tradition has devoted sustained attention to the idea of meritocracy, aswell as to the cultivation of true expertise or mastery: Confucianism.

Mastery, Dependence, and the Ethics of Authority presents a compelling analysis of expertise and authority, and examines classical Confucian conceptions of mastery, dependence, and human relationships in order to suggest new approaches to these issues in ethics and political theory. Contemporary Westerners are heirs to multiple traditions that are suspicious of authority, especially coercive political authority. We are also increasingly wary of dependence, which now often seems tosignify weakness, neediness, and pathology. Analysts commonly presume that both authority and dependence threaten human autonomy, and are thus intrinsically problematic. But these judgments are mistaken. Our capacity for autonomy needs to be cultivated over time through deliberate practices of training, inwhich we depend on the guidance of virtuous and skilled teachers. Confucian thought provides a subtle and powerful analysis of one version of this training process, and of the social supports such an education in autonomy requires-as well as the social value of having virtuous and skilled leaders. Early Confucians also argue that human life is marked by numerous interacting forms of dependence, which are not only ineradicable, but in many ways good. On a Confucian view, it is natural,healthy, and good for people to be deeply dependent on others in a variety of ways across the full human lifespan. They teach us that individual autonomy only develops within a social matrix, structured by relationships of mutual dependence that can either help or hinder it, including a variety ofauthority relations.