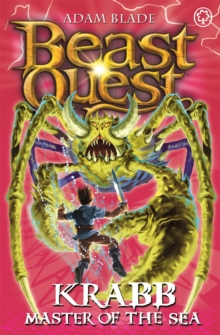 In the realm of Gwildor, the Mistress of the Beasts is under a curse, and her ferocious Beasts are destroying the land.

Tom vows to break the spell, but when deadly Krabb ambushes his boat, it looks like the Quest may already be over... There are SIX thrilling adventures to collect in the Beast Quest: The Shade of Death series: Krabb Master of the Sea; Hawkite Arrow of the Air; Rokk the Walking Mountain; Koldo the Arctic Warrior; Trema the Earth Lord; Amictus the Bug Queen. If you like Beast Quest, check out Adam Blade's other series: Team Hero, Sea Quest and Beast Quest: New Blood!