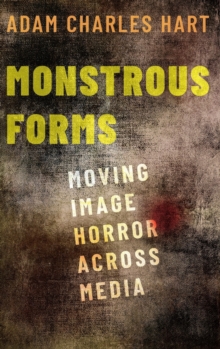 It makes us jump. It makes us scream. It haunts our nightmares. So why do we watch horror? Why do we play it? What could possibly be appealing about a genre that tries to terrify us?

Why would we subject ourselves to shriek-inducing shocks, or spend dozens of hours watching a television show about grotesque flesh-eating monsters?

This book analyzes our experience of and engagement with horror by focusing on its form, paying special attention to the common ground, the styles and forms that move between mediums.

It looks at the ways that moving-image horror addressesits audiences, the ways that it elicits, or demands, responses from its viewers, players, browsers.

Camera movement (or "camera" movement), jump scares, offscreen monsters-horror innovates and perfects styles that directly provoke and stimulate the bodies in front of the screen.

Analyzing films including Paranormal Activity, It Follows, and Get Out, videogames including Amnesia: The Dark Descent, Layers of Fear, and Until Dawn, and TV showsincluding The Walking Dead and American Horror Story, Monstrous Forms argues for understanding horror through its sensational address, and dissects the forms that make that address so effective.