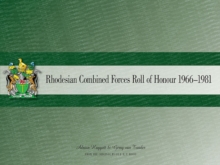 The dreams for which young heroes died How cheap they seem today-Except to those who loved so muchAnd watched them march awayWe live because they died, and yetThey live if we do not forgetThe intention of this publication is to honour all those who lost their lives in action or while on active service with the Rhodesian Security Forces during the period 1966-1981.

Many people have researched the casualties of the Rhodesian Bush War and it is highly unlikely that a single researcher will ever compile a definitive list of all those who perished. It was Dr J.R.T. Wood who produced the first 'most comprehensive' Roll of Honour of the Rhodesian Combined Forces while many others, including Gerry van Tonder and Adrian Haggett, have used his roll as a base for expansion, correction and addition.

It is, therefore, thanks to Dr Wood's original work that the Roll of Honour has been improved to this point. About the AuthorsAdrian Haggett immigrated with his parents and two sisters to Southern Rhodesia in 1958.

Gerry van Tonder was born in Bulawayo, Rhodesia, in 1955.

He joined Internal Affairs in January 1975 and was stationed at Karoi, as a Cadet District Officer.