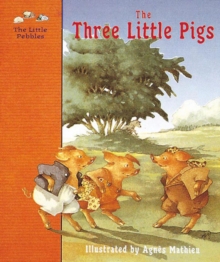 When three little pigs set out to seek their fortunes, each builds a house - one from hay, another from wood, and the third from bricks.

However, a big, bad wolf destroys both the first and second houses.

Luckily, the first two pigs are able to escape to their friend's brick house, where the three outwit the wolf, who cannot blow that house down and instead tries to enter through the chimney!The stories in the Abbeville Classic Fairy Tales series have been adapted for the children of today while respecting the richness and flavor of the original versions.

Children will love the game page at the end of each book, and they will want to read all the books in the series.