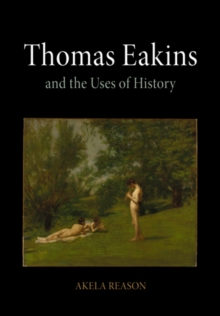 Thomas Eakins and the Uses of History Hardback

Thomas Eakins (1844-1916) was one of America's foremost painters and a highly respected sculptor, photographer, and fine arts teacher.

He is often celebrated for his realist depictions of contemporary life in late nineteenth-century Philadelphia.

Yet, in addition to his iconic paintings of rowers, doctors, and wrestlers, he completed a number of works that reflected his deep and abiding interest in the historical past.

Thomas Eakins and the Uses of History is the first book to examine the artist's lifelong fascination with historical themes.

Akela Reason delves deeply into unpublished letters, diaries of friends and contemporaries, and period newspapers to offer new insights into this aspect of the artist's career. Probing the complex motivations behind his choice of historical subjects, Reason argues that Eakins used these images to express his most deeply held professional aspirations, most notably his self-conscious desire to measure himself against master artists of the distant past.

The author begins with Eakins's first foray into historical painting at the time of Philadelphia's Centennial Fair of 1876, when he conceived William Rush Carving His Allegorical Figure of the Schuylkill River.

A careful analysis of his historical images reveals how Eakins's acute awareness of the historical tradition influenced his teaching and shaped his artistic career.

Indeed, his insistent placement of the historical works in major exhibitions alongside his better-known realist paintings reveals his desire to carve out a place within this tradition.

The artist not only considered these works important to his career; he sometimes suggested that they were among his best.

Eakins's partiality for these historical images makes clear that he envisioned his artistic legacy in terms different from those by which modern art historians have typically defined his art.