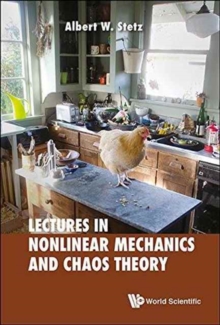 This elegant book presents a rigorous introduction to the theory of nonlinear mechanics and chaos.

It turns out that many simple mechanical systems suffer from a peculiar malady.

They are deterministic in the sense that their motion can be described with partial differential equations, but these equations have no proper solutions and the behavior they describe can be wildly unpredictable.

This is implicit in Newtonian physics, and although it was analyzed in the pioneering work of Poincare in the 19th century, its full significance has only been realized since the advent of modern computing.

This book follows this development in the context of classical mechanics as it is usually taught in most graduate programs in physics.

It starts with the seminal work of Laplace, Hamilton, and Liouville in the early 19th century and shows how their formulation of mechanics inevitably leads to systems that cannot be 'solved' in the usual sense of the word.

It then discusses perturbation theory which, rather than providing approximate solutions, fails catastrophically due to the problem of small denominators.

It then goes on to describe chaotic motion using the tools of discrete maps and Poincare sections.

This leads to the two great landmarks of chaos theory, the Poincare-Birkhoff theorem and the so-called KAM theorem, one of the signal results in modern mathematics.

The book concludes with an appendix discussing the relevance of the KAM theorem to the ergodic hypothesis and the second law of thermodynamics.Lectures on Nonlinear Mechanics and Chaos Theory is written in the easy conversational style of a great teacher.

It also contains homework exercises and a selection of more detailed computational projects.

The book will be valuable to students and faculty in physics, mathematics, and engineering.See Press Release: Problems in mechanics open the door to the orderly world of chaos