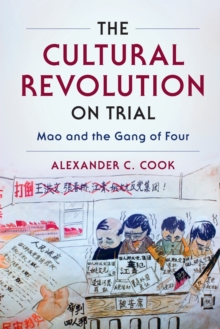 The Cultural Revolution on Trial : Mao and the Gang of Four Paperback / softback

The trial of Cultural Revolution leaders, including Mao's widow and her Gang of Four, was the signal event in China's post-Mao transition.

In its wake, Chinese socialism emerged from the rubble of the Cultural Revolution to create the China that we know today.

This spectacular show trial was a curious example of transitional justice, marking a break from the trauma of the past, a shift to the present era of reform, and a blueprint for building a better future.

In this groundbreaking reconstruction of the most famous trial in Chinese history, Alex Cook shows how the event laid the cornerstone for a new model of socialist justice; at the same time, a comparison of official political and legal sources with works of popular literature reveals the conflicted cultural dimensions of this justice.

The result, Cook argues, saved Chinese socialism as ruling ideology, but at the cost of its revolutionary soul.