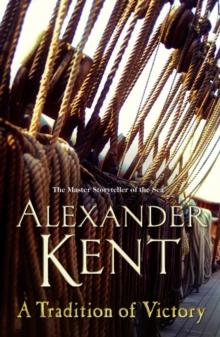 A Tradition of Victory Paperback / softback

This fourteenth Bolitho novel has the epic scenes of action, the powerful characterization and the authentic period detail that have made Alexander Kent a bestseller wherever sea stories are read. After eight years of war between Britain and France there is at last a rumour of peace.

But the old enemies are well aware that any settlement will be only a breathing space in which to recover from their terrible losses.

To obtain the best terms the French muster a show of strength from Biscay to the Channel ports.

At the British Admiralty there are some who see a daring opportunity to even the score at any negotiation table - and who better to undertake it than the young Rear Admiral Bolitho!In June 1801 Bolitho's small squadron is still repairing the scars of battle earned at Copenhagen - and as he receives his orders from London Bolitho is, for the first time in his life, torn between the demands of duty and his real desire to marry.

When the squadron sails it is joined by an additional ship, a frigate with many memories from the past.

But where Bolitho's flag leads so his captains must follow, if necessary to the brink of disaster - for theirs is a tradition of victory.