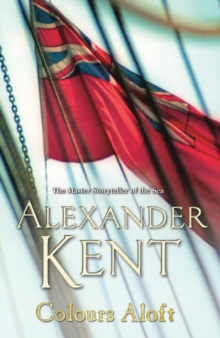 Colours Aloft!, the sixteenth Richard Bolitho novel, bears all the hallmarks of its best-selling predecessors. September 1803Vice-Admiral Sir Richard Bolitho finds himself the new master of the Argonaute, a French flagship taken in battle.

With the Peace of Amiens in ruins, he must leave the safety of Falmouth. What lies ahead is the grim reality of war at close quarters - where Bolitho who will be called upon to anticipate the overall intention of the French fleet.

But the battle has also become a personal vendetta between himself and the French admiral who formerly sailed the Argonaute.

Bolitho and his men are driven to a final rendezvous where no quarter is asked or given.