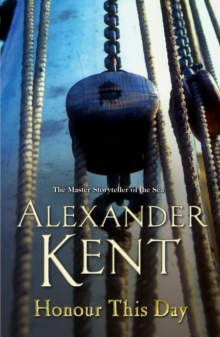 September 1804. England stands alone. Napoleon is at the peak of his powers. The combined fleets of France and Spain are threatening invasion.

Vice-Admiral Richard Bolitho has his own troubles to settle at home too.

But his time on land is broken by an urgent summons from the King. Once more Bolitho hoists his flag above the veteran seventy-four-gun ship Hyperion and sets sail.

This time with a new squadron headed for the Caribbean. Ordered to plan and effect a daring raid on the Spanish Main, Bolitho spares himself nothing from Britain to Antigua, where he rediscovers a passion which defies every convention and threatens his reputation. And the future of the Hyperion is at risk too; set to clear the path to victory, there is a constant fear that this may be her final battle. ______________________________A classic tale of naval warfare from Douglas Reeman, the all-time bestselling master of naval fiction, who served with the Royal Navy on convoy duty in the Atlantic, the Arctic and the North Sea.

He has written dozens of naval books under his own name and the pseudonym Alexander Kent, including the famous Richard Bolitho books set during the Napoleonic Wars.