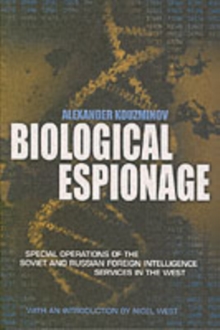 Expose of the USSR's clandestine biological-weapons programme Uncovers the covert practices of the Soviet and Russian intelligence services in the West Written with extraordinary insight by a former KGB operative 'Before the publication of Dr Kouzminov's book nobody in the West had any real idea of Department 12's role in penetrating biological research programmes arround the world and stealing secrets of research.' The Daily Telegraph 'Experts and aficionados will enjoy details on how the section was run and how he maintained espionage contacts with illegals in the West, but ultimately this is truly scary stuff...a thought-provoking work.' Library Journal (USA) In the wake of 9/11 the threat of biological terrorism and sabotage has been thrust to the forefront of public consciousness.

However, this is far from being a new phenomenon. From World War II onwards, the Cold War powers devoted considerable resources to developing what became known in the military as 'bugs and gas'. This groundbreaking study lifts the lid on the top-secret Department 12 of Directorate S (Special Operations) - the elite inner core of the KGB First Chief Directorate and its successor, the Russian Foreign Intelligence Service.

During the 1980s and early 1990s the department encouraged biological espionage, the planning and preparation of biological terrorism and acts of sabotage.

Their work was carried out primarily through 'Illegals' - intelligence operatives who were secretly deployed to the West and covertly operated there, masquerading as citizens of Western countries under assumed names and cover stories. One of its top operatives, Alexander Kouzminov, has decided to break his silence and reveal in depth for the first time the department's tasks, plans and tactics.

More disturbingly, he explores what others in the West and the developing world are and could be capable of.

In this remarkable book we learn the secrets of the USSR's elite intelligence operatives - secrets which could prove vital in maintaining international security in today's uncertain political climate.