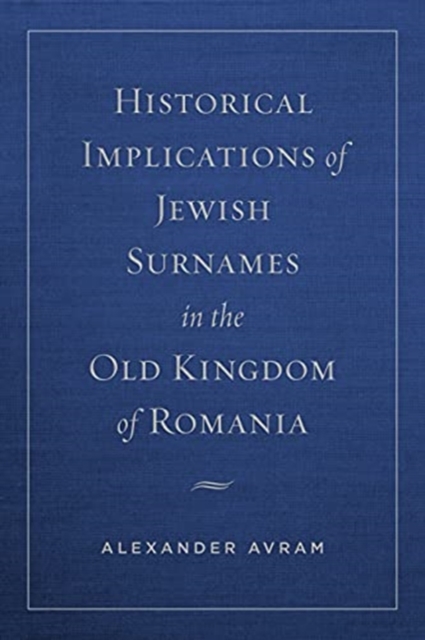 Linguistic and semantic features in names-and surnames in particular-reveal evidence of historical phenomena, such as migrations, occupational structure, and acculturation.

In this book, Alexander Avram assembles and analyzes a corpus of more than 28,000 surnames, including phonetic and graphic variants, used by Jews in Romanian-speaking lands from the sixteenth century until 1944, the end of World War II in Romania. Mining published and unpublished sources, including Holocaust-period material in the Yad Vashem Archives and the Pages of Testimony collection, Avram makes the case that through a careful analysis of the surnames used by Jews in the Old Kingdom of Romania, we can better understand and corroborate different sociohistorical trends and even help resolve disputed historical and historiographical issues.

Using onomastic methodology to substantiate and complement historical research, Avram examines the historical development of these surnames, their geographic patterns, and the ways in which they reflect Romanian Jews' interactions with their surroundings.

The resulting surnames dictionary brings to light a lesser-known chapter of Jewish onomastics.

It documents and preserves local naming patterns and specific surnames, many of which disappeared in the Holocaust along with their bearers. Historical Implications of Jewish Surnames in the Old Kingdom of Romania is the third volume in a series that includes Pleasant Are Their Names: Jewish Names in the Sephardi Diaspora and The Names of Yemenite Jewry: A Social and Cultural History, both of which are available from Penn State University Press.

This installment will be especially welcomed by scholars working in Holocaust studies.