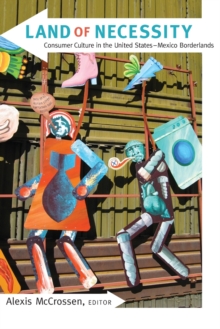 Published in cooperation with the William P. Clements Center for Southwest Studies, Southern Methodist University.In Land of Necessity, historians and anthropologists unravel the interplay of the national and transnational and of scarcity and abundance in the region split by the 1,969-mile boundary line dividing Mexico and the United States.

This richly illustrated volume, with more than 100 images including maps, photographs, and advertisements, explores the convergence of broad demographic, economic, political, cultural, and transnational developments resulting in various forms of consumer culture in the borderlands.

Though its importance is uncontestable, the role of necessity in consumer culture has rarely been explored.

Indeed, it has been argued that where necessity reigns, consumer culture is anemic.

This volume demonstrates otherwise. In doing so, it sheds new light on the history of the U.S.-Mexico borderlands, while also opening up similar terrain for scholarly inquiry into consumer culture. The volume opens with two chapters that detail the historical trajectories of consumer culture and the borderlands.

In the subsequent chapters, contributors take up subjects including smuggling, tourist districts and resorts, purchasing power, and living standards.

Several contributors discuss the movement of people across borders, within cities, and in retail spaces.

In the two afterwords, scholars reflect on the U.S.-Mexico borderlands as a particular site of trade in labor, land, leisure, and commodities, while also musing about consumer culture as a place of complex political and economic negotiations.