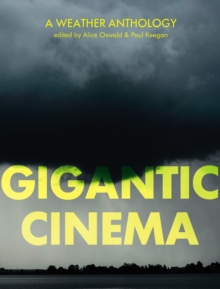 'It is in very truth a sunny, misty, cloudy, dazzling, howling, omniform Day...' - Samuel Taylor Coleridge to William Sotheby, 27 September 1802This anthology of poems and prose ranges from literary weather - Homer's winds, Ovid's flood - to scientific reportage, whether Pliny on the eruption of Vesuvius or Victorian theories of the death of the sun.

It includes imaginary as well as actual responses to what is transitory, and reactions both formal and fleeting - weather rhymes, journals and jottings, diaries and letters - to the drama unfolding above our heads. The entries narrate the weather of a single capricious day, from dawn, through rain, volcanic ash, nuclear dust, snow, light, fog, noon, eclipse, hurricane, flood, dusk, night and back to dawn again.

Rather than drawing attention to authors and titles, entries appear bareheaded, exposed to each other's elements, as a medley of voices.

Rather than adding to our image of nature as a suffering solid, the anthology attends to patterns, events and forces: seasonal and endless, invisible, ephemeral, sudden, catastrophic. And by assembling a chorus of responses (ancient and modern, East and West) to air's manifold appearances, Gigantic Cinema offers a new perspective on what is the oldest conversation of all.