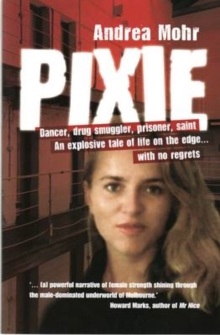 Pixie:Inside A World Of Drugs, Sex And Violence Paperback / softback

Alongside this was a glamorous life filled with travel, movie stars and easy money.

But the dark side of drugs and addiction eventually saw her serve five years jail for importing 5.5 kilograms of cocaine into Australia. Andrea was sent to Deer Park, a maximum security women's prison, a violent, corrupt, mismanaged facility where there were more drugs inside than outside, and where one of her fellow inmates nicknamed her Pixie.

In Pixie she looks back on her involvement in drug smuggling that took her to exotic locations around the world including Columbia, the USA, Thailand and Indonesia. Andrea introduces us to the people she meets and gives us a rare insight into a criminal world few know.

It's a frank and shockingly truthful account of a life filled with dizzying highs - with terrible consequences.

Her book is a blend of vivid dialogue, unforgettable characters, amazing adventures and evocations of the violence of prison life.

But as a sub-text Andrea explores police corruption and the outcomes of justice and punishment.